After a rough weekend and a tough and scary Monday, we woke up late Tuesday morning and turned on the TV expecting to see the Rosie show. “What’s this? The news? Is this a War of the Worlds type show? Is this live???? That is an airplane flying into the World Trade Center!”

I had already started our morning routine by turning on Dan’s computer and the TV and was getting ready to get him up when we were riveted to the TV. Tired from a rough day and late night, what we were seeing wasn’t making any sense. The computer fired up and we started the programs running, Yahoo Instant Messenger was one of the first we always opened. I took Dan into the bathroom, got him dressed and into his wheelchair, all the while listening and trying to comprehend.

My son Dan and I were in NYC, in an NYU dorm on Washington Square Park. The semester was supposed to start Tuesday September 11, 2001. We moved him there from our home in Rochester, NY two weeks before. Dan has Spinal Muscular Atrophy, a motor neuron disease that he was born with. He never walked or was able to bear weight, and had been in a power wheelchair since his teens. Before that it was a manual wheelchair.

Dan was a writer and had already spent a year at Hofstra University studying Journalism. But his passion was writing screenplays. He had applied to NYU’s prestigious Film Writer’s program and had been accepted. Everything was supposed to be set up with him having personal aides ready and available for him like he had at Hofstra, but there was a glitch and the school hadn’t gotten that set up. So I was staying in the dorm room with Dan while we got things straightened out.

In the meantime, we had to go back to Rochester and get his brother Chris, who also had SMA and move him into a dorm at Hoftra. He had the same room and personal aide as Dan did the prior year, so his move went a bit smoother. Chris and I also showed cats, and the weekend of September 8 and 9, 2001 there was a show near Washington, DC. Dan’s girlfriend lived in Baltimore so it worked out that we could all have a fun weekend before they got immersed in school.

Now if you have ever parked a car in NYC you know that it is expensive and not at all easy. So once we realized it was going to be a possibly a few more weeks before they found Dan an aide, I decided to drive the van we had back to Rochester, and fly back. The timing on this was pretty crucial because Dan would be alone while I was driving and flying. The timing looked fine, it was 5 – 6 hours to drive to Rochester, there was a Jet Blue flight at 8 pm from Rochester that would get me back to JFK by 9:30, and a shuttle would have me back at the dorm by 10 – 10:30 pm.

I left Dan with food, TV remote and drinks – he had a small refrigerator with a microwave on it all set up within his reach. His room was pretty well set up for him, so the only issue was hopefully he wouldn’t have to go to the bathroom while I was gone. We really didn’t know anyone in the building yet, so he had no one to call if there was a problem. So there couldn’t be any problems, right?

I left somewhere around 9 or 10 am and the drive was smooth. No traffic or construction issues. So far so good. I packed up some extra things to have with me, books, notebooks, things to work on. I didn’t have a laptop yet, and didn’t bring my desktop computer, I was going on a plane after all and shouldn’t need to be in NYC too much longer. I got to the airport and the flight was delayed. That was going to be a problem, since we had this all timed out and I had the shuttle reservation and Dan was alone. I called and let him know.

At the airport it got scarier, I started to freak out. They were talking about the weather and the possibility of canceling the flight. That was unacceptable. Just when I was about to start looking at other airlines they called us to board. We left at around 9:30 pm, when I was supposed to be landing. But at least we were on our way. Except once we got to JFK there were still weather issues plus all the other delayed planes that needed to land. We circled. And circled. I started to panic again. What if they sent us back to Rochester? What if there wasn’t a shuttle available once we landed? I hadn’t been in NYC long, I didn’t know about the endless supply of cabs or the fact that you could get a shuttle from the terminal. I also didn’t really know how far it was from JFK to the dorm.

We finally landed at around 11. I was still panicking about the shuttle, but was able to get on one fairly easily. I told the driver Washington Square because I really didn’t know my address. It was Goddard Hall but of course the driver had no clue where that was. We went around the terminal and picked up other passengers and finally headed out. I was still pretty freaked because Dan was alone for a long time now and I didn’t know who was being dropped off where and how long it would take.

After an interesting drive out of Brooklyn to Manhattan, the driver stopped at the base of the Twin Towers, near the Hilton hotel on Washington Street. I looked up and said to myself that I would be back since I hadn’t gotten to the top of them yet. We all looked around to see who was going to get off and the driver looked at me. I said no, I’m going to Washington Square. The whole shuttle groaned and the driver slammed the door shut and started up the street. It was 12:05 am on September 11, 2001.

It was 12:30 or so when I was dropped off at the dorm. Now even more fun ensued. I had no ID that said I should be there, Dan’s cell phone battery had died and he couldn’t get to the room phone apparently because when the security guard called up he didn’t answer. So here I am standing in the lobby of a dorm at NYU with suitcases, drenched from rain, my son is on the 3rd floor and I can’t get to him. I don’t remember when she finally let me go up, I remember trying to explain that Dan was handicapped and had been alone for over 14 hours and he needed me to get to him. It got heated. I was very upset. I told her to go up and see for herself but she was alone and couldn’t go up. It took about an hour for me to convince her to let me go up. I think she finally called someone to go with me, all I knew is that I needed to get up there.

Once upstairs, Dan was fine but he wanted something to eat so I went back out, checking with security that I would be able to get back in. There was a 24 hour deli on the corner, as there is on most Manhattan corners. I got the first of many orders of chicken fingers and fries, we ate and finally settled in to bed at 2 am or thereabouts. We were both pretty tired.

Computer is on and Yahoo messenger is pinging away, we’re still trying to figure out what is going on on the TV. I look at Yahoo and Dan’s sister Liz is frantically trying to get ahold of us to see if we are ok. The events of the morning start to unfold. She tells us that they have been trying to call us, sure enough the phone neither the room phone or Dan’s cell phone are working. We’re kind of surprised that we have internet, but that is because NYU has it’s own intranet. This was how we were able to stay in touch with the outside world.

We didn’t know where we were in relation to the Twin Towers. We were at West 4th Street. The fire alarms went off. Out of the building we went. It was a drill, there was a head count, all students had to be accounted for. No one knew if we should stay inside, if we could use the air conditioners or if we should have the windows closed. No one knew how close to the Towers we were. I remembered the drive from hours before and didn’t think it was that far. And I was very glad no one got off the shuttle there.

I still don’t really know if we saw the second plane hit live, time was all scrambled up. We watched the towers fall on the TV. We knew we had friends in places they were talking about, like Tribeca. Dan went downstairs to take a look around while I stayed up talking to Liz on Yahoo and watching the TV. He came back up and said he couldn’t see anything down Broadway so figured we were pretty much ok. I went out a while later and we walked to Broadway and he turned towards the north and said “See, nothing there.” I looked south and froze. “Dan, turn around.” He spun he chair towards where I was looking and we both stopped breathing for a minute. There was smoke billowing from what looked like just a few blocks away. 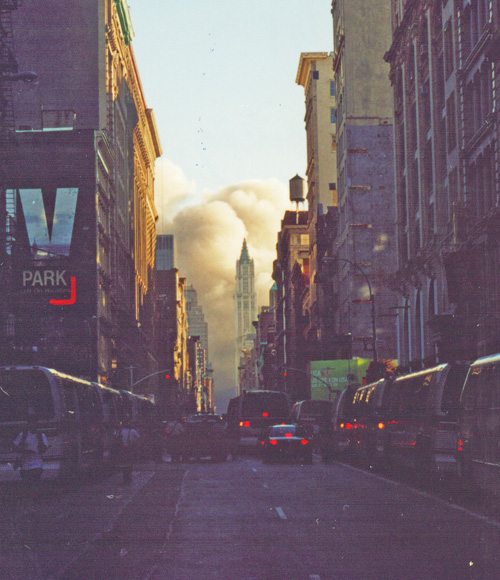 The view towards Downtown from Broadway and West 4th Street. The clouds of smoke were visible for days. Notice the Buses lining the street. They were there to go transport survivors… They were there all day with their motors running.

And it was quiet. The subway had stopped. There were no airplanes in the sky. No cars clogging the streets. We were in the middle of 3 major airports, there were always planes. Then we heard them, F-16s screaming by. And suddenly Broadway was lined with buses with their motors idling. They were parked there ready to go get the survivors and bring them out of the area. They never moved.

Cars, black cars with sirens and lights inside them, unmarked black cars all going in one direction, south. The wrong way on Broadway. Occasionally one covered in heavy gray dust would come north. People were walking with masks on their faces covering their nose and mouth. We even saw dogs with the masks on. 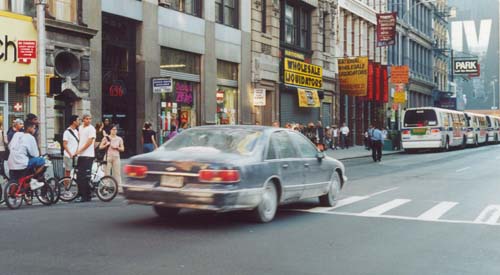 Dan went back inside, there were obviously no classes that day. We heard that below 14th Street was closed. No one could come in, we could leave if we walked up there, but we had no ID so wouldn’t be let back into the area. That was 10 short blocks away. We were in lock down.

I walked south. To see how far I could go. As a photographer all I could think of was this was history in the making and I had to see what I could capture without getting in trouble. The Mayor said anyone below Canal street with a camera would have their camera confiscated. I didn’t know where Canal Street was from where we were. I want to say it was about 10 blocks. I walked across Manhattan and down to Canal Street. That is where I saw this.

On a fence at the barrier from West Side Highway where people were not allowed to walk further downtown was a plastic flag tied to a pole with a white plastic rose tucked in.