You are here: Home / My Work / Skill Building, Creativity and Letting Go 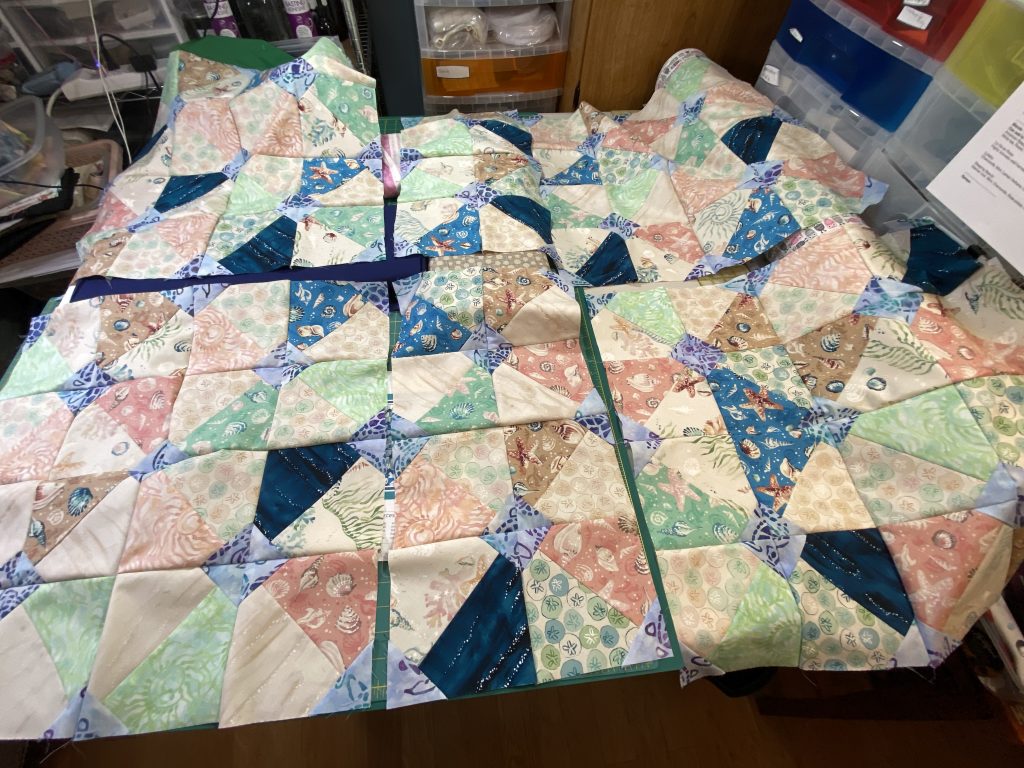 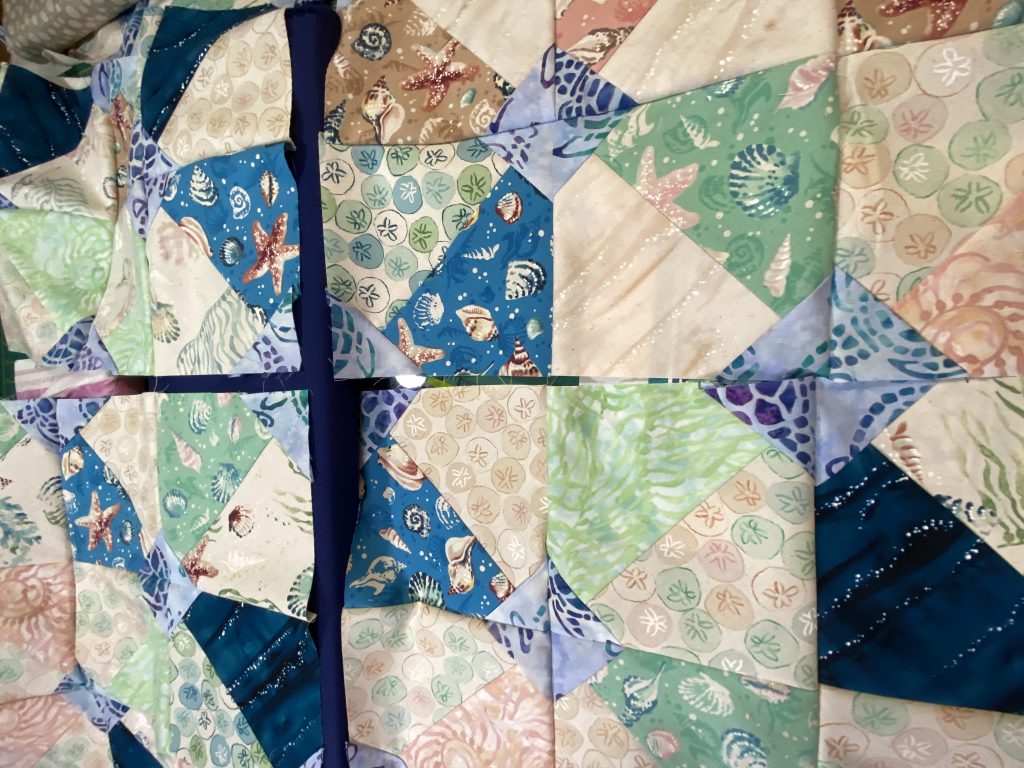 Why am I working on a quilt when I have a gazillion other things to be doing including 2 other quilts I started and stopped to make more sense out of this one?

This quilt started as a very orderly English Garden pattern from Missouri Star Quilt Co. I had this layer cake (precut 10″ squares of a line of fabrics) of sea themed fabrics and decided to use it and not use the solids that the pattern called for. Also during the beginning phases of this one a shipment from Michael Miller Fabrics showed up with a bolt of areally cool sea turtle batik fabric and a bolt of solid blue called Midnight that had been out of stock.

I am also doing this quilt as a “Quilt as you Go” meaning I am going to make blocks and quilt them to a backing and then sash them together instead of just making the whole quilt top first.

I had it all planned out in my head. The purple squares would be the sea turtle batik and the sashing would be the Midnight. The “solid” fabric of the pinwheels would be similar pieces of the squares that were most present in the package and a few from a second package.

I sewed the blocks together and here comes the skill building. Not just sewing skills. Apparently I can’t sew a straight line when it is pretty critical to do just that. I sew a lot of stuff that needs straight lines and do it well. Not on these. Skill built: Patience.

Cut the blocks up and cut up the corner pieces and sewed all those one. Took WAAAAAAAY longer than I expected. 120 blocks with 2 on each. And 2 I did wrong after I already trimmed extra fabric off so had to just sew two more corners on to make it kinda work. Skill built: Patience. Letting Go of expectations.

Now today I started the part that really ramped up the creativity and letting go. I started to create the blocks of four that make up the pinwheels. It was a little challenging to get 4 different fabrics on each block of four but I thought I was doing ok. I had the pinwheels in order – or so I thought. Skill built: logical creativity

Start building the blocks of four of the blocks of four that I will quilt then sash to the rest. Ut oh. All of a sudden the fabrics that were supposed to be in place of the solids were in the place of the prints. I do not rip out perfectly good seams just because something is out of place. Skill built: LETTING GO – let the creativity flow and just go with it

No one except ME knows which fabrics were substituted for the solid wedges. You might be able to figure it out if you stared long enough but really – who cares? Water is fluid. What is in the ocean moves around. So that is what happened here. Skill built: Adaptability!

What you see here is the next to last stage of this quilt. It will NOT even end up in the order seen here because the pieces and parts are still going to the ironing board and sewing machine for backing, batting and quilting. That is the “Quilt as you Go” part. It gets done in parts instead of the WHOLE thing having to go into the sewing machine and be quilted.

Skill building: Lots of practice with new sewing techniques that I will apply to the products that I sew to sell.

Creativity: I am a visual artist – photography, digital art, and now fabric. And things don’t always come out as planned. But they come out looking fabulous.

Letting go: Don’t be OCD and think just because you are following a pattern created by someone or even created by yourself that if things don’t come out as planned that it means it is a bad thing. I love the original pattern and may do it with other fabric more true to it in the future. Or I may go crazy with it again. I also LOVE how the quilt is ACTUALLY looking.

The Sea Turtles will be the backing of the quilt so will be very present and not just the little diamonds and triangles.

I am 64 and learning new skills. And January 2020 I had no sewing machine, no fabric, nothing sewing related – not even a good pair of scissors, in the house. Nada. Skill built: Adapting to what 2020 brought to us. 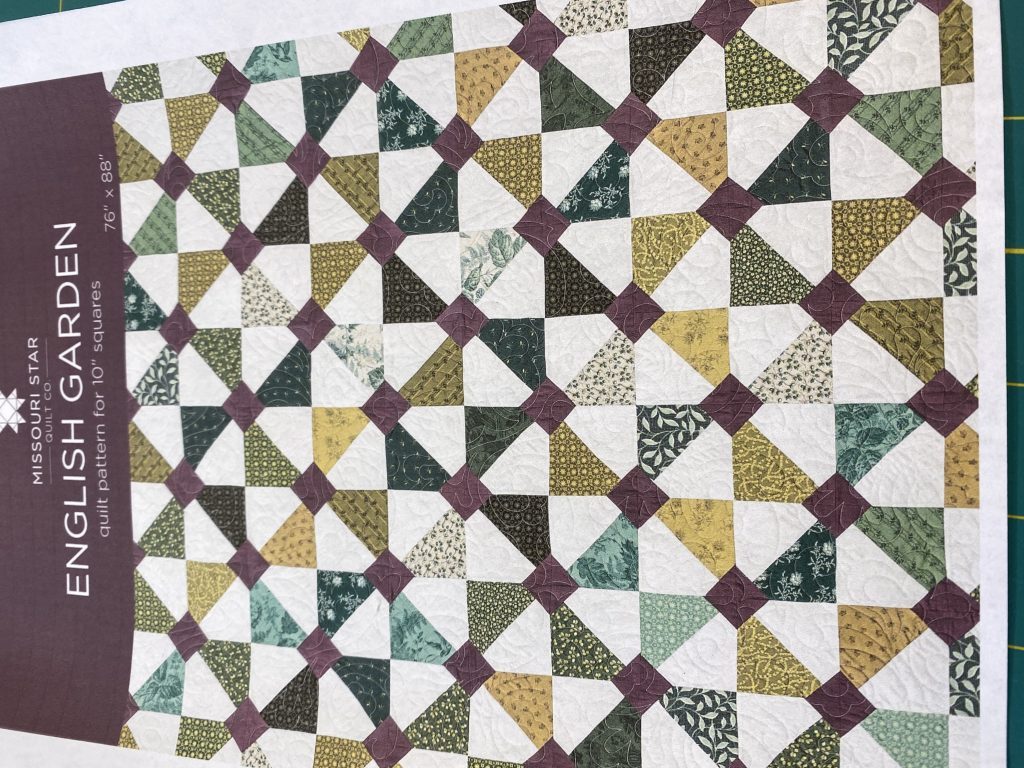